If you shop at Old Navy, Walmart or Gap, chances are the merchandise displays and fitting room fixtures were created by Morgan Li, a firm that has infused new life into retail, hospitality and more with its high-quality, customized displays, fixtures and furnishings.

“Retail is in a transitional place, but that’s a good thing for us,” says CEO Andy Rosenband, who founded the company with his brother Jonathan, who serves as president. “While many brands are closing their doors, the ones staying open know they have to keep coming up with reasons to get consumers off their phones and into their stores. We work with retailers to figure out new ways to keep the shopping experience fresh.”

Indeed, customization is the hot trend these days, and across many industries, particularly those catering to millennials who tend to want things “their way.” Riding that wave, Morgan Li has enjoyed 33 percent year-over-year growth since its 2009 founding. 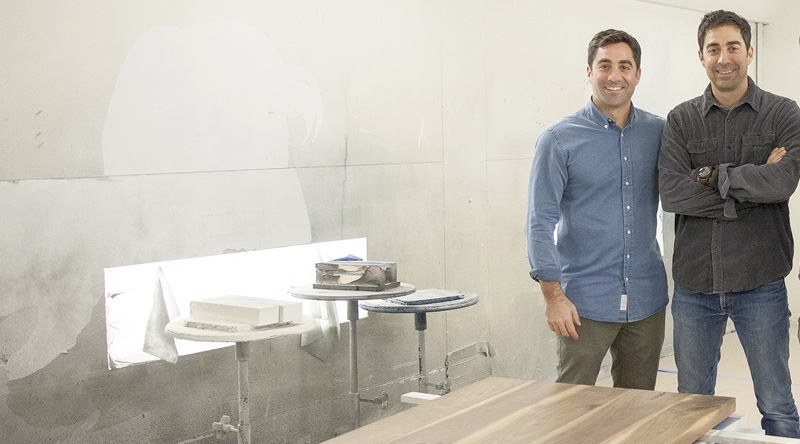 Morgan Li works with merchants large and small, including independents and major chains. For example, Walmart’s last order was a fixture rollout for 4,400 stores nationwide, while Adidas ordered three custom pop-up stores as part of an aggressive marketing campaign against Nike and Under Armor.

“Most of our competitors can’t handle the smaller, one-off solutions the way we do,” says Jonathan Rosenband. “If customers have an idea in their head, we collaborate with them to bring it to life. We enjoy taking on different design challenges, finding ways to source them, and manufacturing them with an array of materials and options, all the while functioning as a one-stop-shop.”

Expanding Into Hospitality, Other Industries

Similarly, Morgan Li is the go-to partner for luxury hotel chains including the Ritz-Carlton and, closer to home, smaller boutique properties such as the new Wheelhouse Hotel in Wrigleyville that are embracing millennials’ demand for affordable yet uniquely stylish digs. For the Wheelhouse Hotel, Morgan Li created custom in-room furniture as well as pieces for the lobby and other public spaces.

Whether it’s unique in-room features such as tiered sleeping (aka bunk beds), open closets, modular kitchenettes, or lobby and shared-space solutions, Morgan Li can do it all.

With another partner, Morgan Li recently designed custom office furniture for the Chicago Loop offices of data analytics company Nielsen. Corporate is an area they’re looking to grow, along with healthcare.

“We continue to win business because of our client-focused can-do mentality. We implement malleable solutions while being nimble, efficient and timely to better serve our clients’ needs, not the other way around,” Jonathan Rosenband says.

Based in south suburban Chicago Heights, Morgan Li operates a 500,000-square-foot factory and warehouse there, as well as facilities in Taiwan, Vietnam and China (the “Li” in Morgan Li comes from the company’s factory partner in China.) “The combined 3.5 million square feet of factory space enables us to do everything from scratch concept work to global scale fulfillment and everything in between,” Jonathan Rosenband says.

Manufacturing, it seems, comes naturally to the Rosenbands. Grandfather Maurice founded a Chicago-area radiator manufacturing company more than 70 years ago that served clients throughout the Midwest. Later, Phil, father of Jonathan and Andy, took over and shifted the focus to backroom and salesfloor shelving solutions that expanded nationwide. Phil Rosenband remains active at Morgan Li.

When retailers began to revitalize following the economic downturn of 2008, the newly created company was ready to assist, with its unique, untraditional (for a manufacturer) ability to partner with its customers in a role that extends beyond basic order-fulfilling. Its design focus, faster turn-around and ability to create custom products from metal, wood, acrylic and other materials sets it apart. It has invested in partnerships, equipment and people to make it faster and nimbler than competing manufacturers. The Rosenbands describe the approach as “Midwest grit, global scale.”

One of the secrets to their success, they say, is finding the right mix of people.

A former professional soccer player, Andy Rosenband says the game has taught him that not everyone can, or should, be great at the same thing; what’s important is how people work together. “We try to find employees who believe in our culture and share our passion, but who also have skill sets different from one another. We seek to build a collaborative team with the same drive and goals, but who bring different ideas to the table.”

He describes Morgan Li’s workplace as an “experienced-based environment” with a few millennial employees—a number he hopes to grow by seeking out interns from local universities.

Several new projects are on the horizon, including expanded assignments from Old Navy, which just announced another 55 store openings, in addition to the 13 remodeled and 50 new stores already scheduled to open in 2018. “Their brand is growing, and Morgan Li is supplying unique fixtures that create the positive and fun in-store experience that their loyal customers have come to expect and enjoy,” Jonathan Rosenband says.

The Power of Entrance/Exit Displays

First impressions are everything. The human mind is built to make...